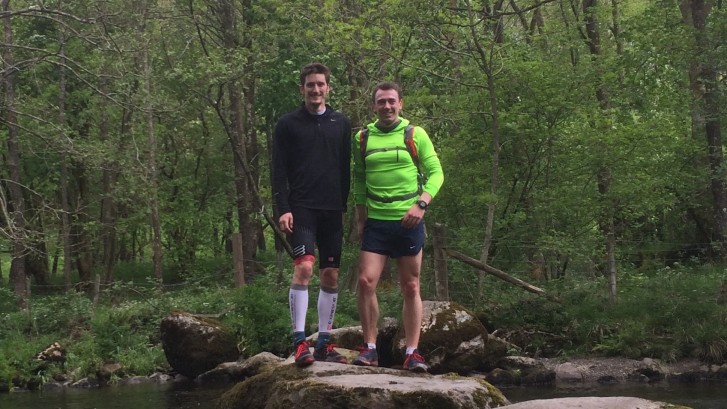 The value of a quiet evening is increasing rapidly when I get the chance, such are the intensity of my sessions at the moment. The last blog left us a week and a half ago having just started morning sessions. The run is quite easy, as I have an end destination. The getting up to go into the garage is not so easy, my motivation gets stretched here a bit!

That got me through the week and onto a train to Wigan on Friday night. Come Saturday morning, Sam and I packed our bags and off we drive to the Lake District. Sam had a route planned that included a lot of climbing and running along ridges – perfect for what I needed. Unfortunately, it wasn’t to be! The wind was ridiculous. We set off with a few early steep hills, the legs weren’t warmed up fully for them yet but we drive through and started feeling nice and strong as they loosened. Once we got to around 10km, a ridiculously steep cliff face was the next challenge – which ended in a bit of disappointment. When we got onto the ridge, it was too dangerous. The wind moved you with the gusts, and neither of us fancied a trip down the side of the ridge when the wind got ahold of us. Photo below shows me almost being blown away.

Improvisation was needed, and luckily Sam knew the area. The route wasn’t a pretty loop like previously planned, but it was a good loop. 34km covered around the Lake District with over 1000m of elevation gain. Huge confidence boost for me, I felt like I could go on.

It was a completely different kettle of fish to the running I was used to. Even down to the simple things. I will never eat solid foods whilst running on the road, and I will never stop to eat on the road but taking a minute every so often to eat an energy bar or a flapjack is very important when up in the hills.

On Sunday it was a short swim in the lake, around 1500m to loosen the legs before a shorter run of 12km around the trails more local to Sam’s house. A fry up for brunch and then back on the train back down to the big smoke to complete a brilliant weekend of training and a great catch up with a good mate.

This week has been a bit of a mixture due to two days being spent on courses and a bit of a training hangover from the weekend. Monday’s swimming class was a struggle but I managed to realise a way to make myself quicker if I can perfect it within the next 6 weeks. My early alarm went off for the turbo training session on Tuesday, it was a struggle as I was very tired from the weekend, but I got a short time in and managed the same later in the day. The alarm was rejected on Wednesday, far too tired, before getting home and getting a longer turbo session that afternoon. Early course finish was ideal! Thursday and Friday ended up being rest days. Mornings were too much of a struggle and my body didn’t want it. Bad times but it happens.

Today’s swim was brilliant. 4 laps of the lake, so 3200m total at exactly the speed that I want to swim in Zurich. Very good news! Cricket was called off today, rain won the battle. I considered using the time for training, but with a 120km cycle in the morning, a rest wouldn’t be the worst preparation.

With two weeks exactly until the Ultra Marathon and 5 weeks and 1 day until the Ironman, these next few weeks are vital for my training with longer cycling and swim sessions to push myself to the peak prior to tapering down to the events.

And just a few stats for you: