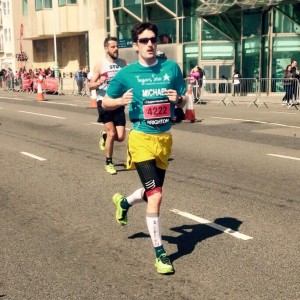 This post took me a couple of attempts to get finished. Not really due to not knowing what to write, but due to not being able to sit down for too long before my legs go dead. I am definitely suffering after the Brighton Marathon, but it’s definitely worth it.

I had a 14km run last Sunday, which I was meant to take easy but my legs felt heavy, so I tried to push through that to get them loose. It worked, and I had a surprisingly quick training run to lead me into the final week, which was planned to be low key.

Monday was swimming day, a good session on Bank Holiday Monday, smaller attendance always means more lengths to do! Tuesday was a light spin on the turbo trainer in the garage, nothing too extreme just keeping the legs alive. Wednesday was a glorious rest day followed by a small run from work to Finsbury Park – my final run before the Brighton Marathon.

The weekend turned up! Woke up Saturday morning, packed my stuff (about 3 times, I have a habit of forgettings things) and got the train down to Brighton. The train journey was an interesting mixture of people travelling to Gatwick to go on holiday, people travelling from Gatwick after being on holiday, marathon runners, people heading down to enjoy a sunny weekend on the beach and people heading down for a few nights out on the town. The variation in conversations was good to eavesdrop.

Once we arrived, we headed for some lunch (pasta, obviously) and checked in at our Airbnb place. The place I had booked was 20 minute walk from the start line, perfect distance to get the legs warm enough. The main issue was I had forgotten that the marathon finished on the sea front and Brighton is situated on a mountain if you’re trying to get back up from the beach, but that was going to be Sunday afternoons problem! The Expo was interesting, I had been to Paris the year before which was ridiculously big, I got lost 3 times. This one was much smaller and selective.  I picked up my number and then took a wander around. I heard a sales pitch from the guy at the Osmo stall, a nutrition type I had looked into before (it was a successful pitch, I ordered some stuff last night!) and there was also a health check going on. 10.9% body fat with 61.5% hydration (target 55-65%). Bang on! We had a guess at the amount of apples in a box, Chloe guessed at 596 & the answer is 594, we are waiting to hear if she won.

A mandatory trip to Brighton pier to win some tickets followed before back up to the top of the mountain for dinner and relaxation.

Now onto the race. Sunday morning came and the 6.30 alarm went off. Breakfast is the same thing before every race – porridge with raisins, croissant & a banana for the walk to the race. I got into my race pen very early, there was an opportunity to be right at the front for the start – which I completely bottled. I would probably trip over and get stampeded or something! The buzzer went and I set off. I started reasonably quick, but I wanted to get off into some space and settle into a zone. I past the 3.15 pacer & set myself into a steady rhythm. My target average split was 4.37/km and I wanted to settle in at that after I had some space – this unfortunately didn’t happen. I got caught up with the pace I was running and put a bit too much in early doors. The first 10km had flown by – 44.36 minutes – and this is when I found a running friend (Nick) to run with – he was suffering with the same problem as me – he was targeting 3.15 and had set off too quick. We settled into a rhythm together, slowing our splits down bit my bit, crossing the half way point in 1.34.37. It wasn’t far after this that I started feeling it. I had had one gel, and we had our 3rd out and back section. I didn’t feel awful, I just noticed that my comfortable pace was dropping – and I let it. I knew I had gone off too quick and that I needed to manage myself through the second half. We reached 30km (still with Nick) at 2.16.48. Still nicely ahead of the pace.

This is where I think Brighton need to rethink their course. The final out and back is around a power station, on what on a map appears to be an island. Not many supporters venture out there and the road surface is awful. Just when you enter your final 6 miles and you need the help, you find yourself running on broken tarmac with a handful of supporters cheering for you, instead of thousands. I hit the wall massively. I lost Nick just before this, I found some new energy that I would guess was the last bit of proper life in my legs leaving my body as the next 9km was hell! At 22 miles, the 3.15 pacers overtook me. I tried to push with them, but my hamstrings were starting to feel it and I had to make the decision to complete the race with a good time, instead of pushing myself to failure. The final 4 miles were pretty horrible, running very slowly in comparison to what I am used to. And then I came back into the crowds. And then I saw the finish line. 300m to go. I looked at my watch and saw that I could sneak under 3 hours 20 still. One last push. Stride increased, and with 75m to go, I felt the cramp. Both hamstrings. There will be some classic photos towards the end of a man in multi coloured gear running with two straight legs near the finish. I didn’t care, I made it.

A note on my attire: wearing brightly coloured clothing 100% gets you more attention for the cameras and the cheers. Having your name on your top is the best thing ever also, thousands of people (I now refer to them as my fans), cheering you on by name. Definitely helps. So thanks for my thousands of fans in Brighton for cheering me on!

On to the next one. 19 days until Prague Marathon!

Photos from the Marathon